Do not ask your children

to strive for extraordinary lives.

Such striving may seem admirable,

but it is the way of foolishness.

Help them instead to find the wonder

and the marvel of an ordinary life.

Show them the joy of tasting

Show them how to cry

when pets and people die

Show them the infinite pleasure

in the touch of hand.

And make the ordinary come alive for them.

The extraordinary will take care of itself.

I had the good fortune of coming across this beautiful piece of poetry when a friend posted it. And it hit me strongly, delightfully and convincingly.

Coincidentally, not long before reading it, I had a conversation with my husband out of insecurity and guilt if he thought, I or we were doing enough with/for our children? If we were readying them for the world, inflating them with the zeal to excel and succeed and cramming them with such skill sets? Or was I making them complacent, mediocre and unambitious, especially my daughter? Because while my son follows a rigorous tennis schedule with a good academic record, my daughter mostly loves finding her own way through books, stories, imagination, paper, scissors and glue with a characteristic goofiness.

While these doubts were still rummaging through me, William Martin answered me through his poem. It allayed my self-doubt as a parent that it was alright not to be hankering behind your children to make them “extraordinaire”. However, the words only assuaged my mind without altering my actions. For what I did exactly after a couple of days was a slap in my own face.

Both my children are voracious readers with an impressive command over language and interest in literature. So, they both participated in the competitive English Olympiad exam. On the morning of the exam as they were leaving for school, I gushed, “Good luck kiddos… both of you better get that Gold.” So much for not yearning for par excellence.

My son in his pre-teen mode was rather non-committal and dismissive, “Mummy please, we’ll do what we can” and my daughter always the negotiator went, “Haha! I might get a silver so be happy.” After they left, this exact poem made a mocking comeback at me.  In my defence, I’ll say as much that my tone was neither threatening nor pushy, the point of gold was not to put pressure but to nudge them to give it their best shot. To be diligent and smart instead of careless or carefree. But that’s just my defence. How they would perceive it is entirely different. Maybe they would be averse to appear for such exams again because they feel obliged to strive for gold. I could have turned their fun and interest in the language into a narrow result-oriented chore.

But aren’t we supposed to teach our children to excel, compete and win? I recently heard a Chief Guest in school say in his speech that, “…stop telling your children that it’s enough to participate. It’s not enough. You participate to compete.” By that extension you compete to win. I wonder when we are constantly competing against others is there any joy or carefreeness left in that work? At the same time, does anyone ever give their best effort without the motivation of victory, fame and all that comes with it? If I refrain from coaxing my children to strive for the extraordinary, I may be stunting them from reaching their full potential. And I fear that.

Let’s leave the children aside for a moment and focus on ourselves. It’s not my imagination but I did feel that until five years ago when some people (there were only handful of such) said that they weren’t particularly ambitious, or workaholics or aspiring to grow their wealth manifold or have their work spread pan country or world, they were almost cringed upon. Such a friend or sibling was a complacent black sheep. It was totally uncool to be content. They could be thought upon as unenterprising sloths who refused to be part of the rat race. Mind you, these ‘underachieving’ folks hadn’t left themselves to the vagaries of life. They still did well for themselves.

Rewind to 2019 and the world halted. Need I remind the reason. In that period of absolute shutdown, what remained was truly and only just the ordinary. And in a matter of days people started seeing the marvel in it. They saw it in their homemade breads, in the Delgado coffees, in their gardens, in their easels and palettes, in the neighbourhoods, even in the confines of their homes. Yes, we missed the human touch. The comfort of those hugs in hours of grieving and loneliness. But we did find the marvel in the roasting of tomatoes, the fragrance of flowers, even the clearing of cobwebs and so much more.

This mass slowmo of life came as a surprising respite. Most people seemed keen to continue with it barring the social isolation. But of course, everyone’s back in the race with old gusto. Yet, there is a trifle deceleration in people’s ambitious mindsets.

In between these two tangents of thoughts, one of the competitiveness to be outstanding versus simply soaking in and feeling the ordinary; I find it difficult to negotiate and understand its bearing in real life. So, I reread the poem and it struck me clear. The poet writes, “Do not ask your children to strive for extraordinary lives”. He doesn’t stop at “Do not ask your children to strive” and that’s where the key lies.

Only if we could mutate our psyche to work, strive, endeavour without the bait of compensated pleasure or pressure, we would indeed see the awe in the ordinary. I would look at it thus, you keep baking your bread savouring its rise, aroma and slice every time without worrying if it’s the best one. Yet, eager to partake it with kindness and delight. Then one fine day, just like that with all your non-pressured tinkering the extraordinary one pops out.

While this whole essay was still knotting and threading itself in my head, I read this intriguing quote by Jaggi Vasudev most fortuitously as if the last word to rest my doubts, “There is no purpose to your life. If you experience the exuberance of this existence and the ecstasy of being here, will you bother about a purpose?”

On that note, I’ll leave you to reflect on it.

Do we need God? 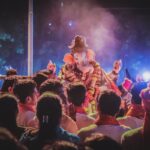