Somewhere in the not-so-distant past, two questions came calling to me. They weren’t simple, they weren’t as complex. But they were audacious and needed one to be honest. I had my own answers ready but it was imperative to know what others thought of these questions. Without testing your curiosity any further, let me spill them here: “Does our desire for others evaporate by the assurance of the singular promise of marriage?” and “Are individuals allowed to stray in happy marriages? In unhappy ones they probably have their justification but are they justified in happy ones too?”

These questions were prompted by Kavita Kane’s “Ahalya’s Awakening” but they seemed so rightly timed in this day when our generation is manoeuvring conversations about “open marriages”, “swinging” and the likes. I sent these questions to a small sample size of couples with varied years of marriage to get a fair and objective perspective on it. Unsurprisingly, the answer to the first question was almost unanimous that marriage does not evaporate the desire for others. There were no ifs and buts, it was a clear honest response.

The second one was of course trickier that elicited more wordy explanations, making sense of right from wrong, black from white about mortal instincts. Some said that people are of course tempted to stray but the consequences hold them back. Putting a fairly happy long-standing marriage at risk for an indulgence might not be the wisest decision if your partner or spouse wouldn’t accept it at all. While some said that though tempted, they wouldn’t stray out of their own moral code. However, there were a few others who believed that as long as their partner is aware of the straying and consents it, it is indeed alright otherwise it is not. My personal response sided with the latter group. Let me clarify that ‘straying’ here doesn’t imply an established extra marital affair. Straying presumes indulgences in moments of heightened sensual demands wherein you give in to its sublimation.

For the longest time after I did this survey, I still grappled with the answers at the subconscious level for some reason. Over the course of my adult life especially last few years I read some spiritual texts and attended a couple of meditative courses and in each without exception they restrained sexual promiscuity, sexual misconduct, sexual relationships outside marriage. On the grounds of morality, I could well and easily understand this sanction coming from spiritual disciplines. Sexual misconduct implied non-consensual intimacy amounting to molestation or rape which is inhuman and criminal. Sexual promiscuity or intimacy outside marriage behind your spouse’s back clearly implies cheating and hurting. All these acts naturally fall short on moral conduct and hence their forbiddance is valid and justified.

However, this justification didn’t hold true for me with respect to “straying” when we bring in an ‘aware and consenting partner’ to the table. In such a scenario, there is no allegation of cheating, going behind the partner’s back or hurting them in any way. For me, it certainly absolves the straying partner from any moral or emotional misconduct. But whatever I had read or comprehended in various texts and books; didn’t talk about this scenario. They unequivocally forbade sexual straying, whether consented or non-consented by the partner/spouse. It didn’t convince my mind. And I deliberately avoided reading more on it because I didn’t want to be convinced by others words. However, I was humble enough to believe that when most spiritual literature and paths preached the same thing, there must be a strong and rational base for it. But I wanted to find this base on my own, through my own understanding and experience.

I didn’t attempt writing this blog any earlier despite the survey done months ago because I was in a fog myself. However, the fog began to lift slowly as I did my first Vipassana course. “No sexual misconduct” is one of the primary requisites when one undertakes this course, to which end there is complete seclusion of males and females during the ten-day duration.

As I progressed in the course, some most revelatory things surfaced. An unimaginable spectrum of sensations thrived within my body. From blankness to gross pricks and pains to intense subtle vibrations, I felt it all. Anger, guilt, anxiety, remorse, kindness, love, they all exhibit on your body in identifiable forms. Any explanation is futile because this experience can only be lived. With these emotions raging a vibrational storm, lust came too as a form of sensation in all it’s might and splendour without there being any external stimulus for it.

As your mind and body sharpen, you start perceiving the different vibrations. And I could unmistakably pick the kind of sensations that came with LUST. Damn me! No wonder the world hankers so much for sex because it generates by far the most pleasurable sensory experience in your body most easily. You love those extremely pleasurable vibrations cruising through you. For the very first time, I saw ‘desire’ detached from myself and then I also felt the intense craving that comes to relive these aroused sensations. The longing to feel it yet again and then again.

Gradually, it also becomes somewhat clearer that as you indulge in this physical permissiveness, it is not so much about the source of its fulfilment than just the need being fulfilled that matters, though to our disillusioned mind it appears other way. I find a very befitting corollary to explain this, once a person is accustomed to the sensations and effects of alcohol, he sure enjoys the flavours, whiffs and aromas of his cocktails yet the singular motive is to reach the point of being ‘high’. Same way you enjoy the flavour and intimacy that come from different people but the primary aim is YOUR sensual gratification. Soon enough a drinker doesn’t give a heck whether that buzz comes from gin, vodka or whiskey. All that counts is the indulgence of his craving.

Lust doesn’t work differently from this. After a point, you are quite likely to find yourself skimming from one pleasure source to another. Yes, you do attach some value, worth and affection to certain people from whom this pleasure comes but practically it serves only to gratify your personal needs. The question still remains how does morality come in between all this? It may not come directly, but it tends to come at some juncture. When lust overrides you, the lines of right and wrong begin to blur. Your focus is single minded and fulfilment is primary, and this is why I believe molestations and rape happen because the code of conduct no longer binds you in your carnal frenzy. Even without going to that extreme, morality and fidelity get compromised when under the spell of their own sexual longing people begin to lie, hide, cheat and hurt their families and partners.

Coming back to the original questions, for majority of us mortals ‘desire for others’ exists irrespective of marriage. IT IS THERE, NO DENYING IT. Second question then, what do you do with it, suppress it for fear of ramifications, indulge in it with a price of moral compromise or consummate it with consent from the signing authority aka spouse? Clandestine indulgences or straying is certainly not justified because it is a breach of faith. However, according to me, indulging in it with your spouse’s knowledge has no moral charge or incrimination because there is no broken trust or emotional guilt. There is no question of justification for this straying. It is merely about exercising your liberty and choice.

Yet, the spiritualists give a third solution for the tempest of temptations, which is just to observe the sensation as it rises and let it go. “AWARE” not about the spouse’s whereabouts, but ‘AWARE’ about yourself, about the engulfing lust and then it’s dissipation as you learn to simply watch it. There is no suppression or aversion or action, just an equanimous awareness of its presence. Does it work? Yes. Is it easy? No.

In the societal construct, the promise of fidelity looks like a moral requisite or contract for the benefit of the partner or to forcefully impinge your sexual freedom. But to a more evolved and perceptive mind, the promise of fidelity is for the benefit of oneself. To discourage one from reaching a place of compromise and crime or enslaving oneself to the commands of craving, that all (almost all) spiritual paths forbid free run of lust. As they say, nipping the evil in the bud.

But what do you do till you reach this higher plane of unperturbed observation? You sometimes surrender to the passionate ambrosia, other times you fight it out, sometimes you rationalize it in your head, other times you let your heart run amok, sometimes your morality chastises you, other times you throw the yoke of conditioning. Mostly, you and I dwindle and will dwindle between this sensational and conscientious chase. But meanwhile, maybe we at least learn to look at these “amorous sensations” beyond the parochial filters of conditioned morality and virtuosity and then choose to indulge them or reject them or observe them for the right reasons.

Read more such aspects of relationships in my book “Streams Meet and Rivers Flow” now on Amazon and Kindle.

Announcing the Launch of my mini-book series ‘a Soul Search’ 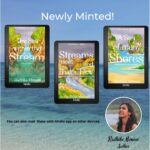 LAW OF KARMA – As Beyond the KURUKSHETRA