The legendary verse from Bhagvad Gita that talks about the nature between man and his karma. It freely translates as “You have the right to work only but never to its fruits. Let not the fruits of action be your motive, nor let your attachment be to inaction.” By this wisdom, as I write now my only karma is to write, to let my thoughts run their course and find their own words. Then persevere to let those words be a meaningful exercise. It is not for me to attach myself to my writing or its fate, to its appreciation or applause, to its criticism or doom.

This wisdom often led me to wonder what would even be the motivation to write or persist in any endeavour if not for the fruit? Don’t majority of us do things whether out of passion, choice, need or any other reason because its results are for us to bear and enjoy? It is only because of the attachment to the fruits that we even work. By this fact, we are largely and grossly living against the “code of karma” as postulated by ancient texts.

However, the code has no impact or meaning by merely reading, hearing or discussing it. You can really believe in its veracity only on experience. Becoming a writer was a childhood dream when I didn’t even understand what it meant or ensued. However, over the last year as I realistically got thinking about publishing my books; self-doubt, fear of failure and embarrassment if the books weren’t read gnawed me inside, flaring my anxiety every now and then. I dreaded the outcome of my dream. After all, I had poured my heart and mind in those pages; how could I not be attached to it and its fruits?

Yet, there came a morning and a very specific moment when I was in Igatpuri pursuing Vipassana that I internalized Krishna’s wisdom of karma. For the first time, I understood what it meant to detach myself from the result of my work. And that awareness liberated me from being the sceptic. I wasn’t stressing over the consequences anymore. And as the fear dissolved, I willed to publish the books no matter how they would be received. Most importantly this detachment didn’t make me indifferent or callous toward my work. In fact, I pursued it with unflustered passion, joy and hope.

But this is only one aspect of karma and its fruit, the physical aspect where ‘karm’ literally translates as any action or act in the real world. However, when we are talking about the ‘law of karma’, it doesn’t restrict itself to mere physical actions. It applies in equal fairness to every mental and verbal action even if it may or may not be actualized. Also, let’s not forget that every karma by default has an inherent fruit. It is about cause and effect. About action and reaction.

I have more than once cussed and wanted to hit someone on the road out of road rage but I have never even abused aloud lest hit another. Yet, with my agitated and enraged thoughts I have most definitely incurred a karma, the fruit of which is my own mental imbalance and sourness. The motorcyclist who enraged me is not even aware of what’s transpiring in my mind, he’s long gone jumping the red light.

But the question is what about the motorcyclist’s karma? He clearly flouted a law, inconvenienced people, might have even risked his own and others’ lives. But he doesn’t care. In fact, someone else may bear the brunt of his karma by being hit. He might even say that he just did what he had to, whose fruits are not for him to bear by the law of karma itself. But what about an ambulance which also jumps a red light and flouts a rule? But of course, an ambulance does it out of duty and responsibility to save someone’s life. How inane am I to even compare the two? I am not! The ambulance’s action though physically same as the motorcyclist, does not and cannot bear the same fruit. Just as a murderer stabbing a person in the stomach is as much the same thing as a doctor using a scalpel to cut his patient’s abdomen. But naturally, their motive, intention and state of mind are absolutely different while indulging in the same physical act.

It most evidently implies that the law of karma doesn’t operate merely on the physical plane. There is no right or wrong or good or bad in the physical realm. There are mere acts and actions. The thought, head space and the motive of your conscience behind the act are the true key operators. Interestingly, even when two people are doing charity, one’s motive could be name and fame while other’s is purely humanitarian. The physical ‘karm’ though same for both, their incurred ‘karma’ is certainly different.

After the karma comes the fruit of it, which follows the age-old adage “as you sow, so shall you reap”. Planting a neem seed don’t be foolish to expect a mango tree with its juicy fruits. This law and logic, however applies much more subtly in real life. When I was fearful of my books, I got anxiety. When I got angry and aggressive towards the motorcyclist even if only in my head, I got rancid inside. That’s the undeniable fruit of my karma, the reaction to my action. Problem is my attachment to generating these unwholesome karmas. Longer and deeper the attachment, more intense the reaction. However, I have actually tried and tested this, the moment I become objective about my anger and own it up instead of rolling in it frantically, I become free of its fruit. In this case the “worked up’ feeling inside me does subside bringing in a semblance of normalcy.

But so far, it’s all about my karma. What about the motorcyclist? I am curious to understand what happens to his wrong doing? Oh wait! didn’t I just mention that there are no rights and wrongs in the physical realm? But jumping a red light is still wrong, isn’t it? Okay, let’s just say his ‘act’, does it go unpunished, unchecked? Because I really don’t think there’s anyone out there maintaining a ledger of each one’s rights and wrongs especially about such petty matters. In a country like ours even the dedicated cops don’t do that so what to tell about an omniscient power who might be held up with more pressing issues if at all. I am saying this despite being a complete believer, yet I don’t think God is sitting up there keeping a logbook for each one of us.

But I have indeed come to believe from personal experience that there is a self-implementing and self-regulating ‘law of karma’ put into place by God or nature or whoever where logbooks are unnecessary. The notion of someone’s or everyone’s vicious karma coming back to bite them someday in the future is consoling but neither reliable nor confirmed. However, what is certain is that any action mental, verbal or physical committed out of treachery, jealousy, rage, revenge, greed, hatred, ego or fear can never ever induce joy, peace or composure. Such a person is robbed of sleep with a sense of disquiet chugging along as a companion and I feel it’s bad enough. By the same law, a person acting out of compassion, fairness, generosity, love and detachment bears the fruit of contentment and tranquillity without fail.

The ‘law of karma’ operates on a different playing field where we don’t care to see. We are so focussed waiting to watch how it plays itself out in the physical world outside that we completely miss the fact that it strikes sharper and deeper lacerating the insides. For me, the justice in the law of karma stands reaffirmed.

The Sea within the Stream – life as I see it

A Sea of many Shores – reflections on our society

The Promise of Fidelity in Marriage 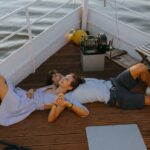